The “Monastero di San Lorenzo,” located in the municipality of Todi, was originally a Benedictine abbey and was first mentioned in chronicles dating back to 1227. It assumed a different function when, in 1235,  Bonifacio, the bishop of Todi at the time, created a convent for the Clarisse order of nuns and donated by a notary act the Monastery to the Franciscans to use as they wished. That is why it may be named in local maps either abbey or monastery and both names are correct. Beato Simone da Collazzone, a companion of Saint Francis of Assisi, witnessed the donation. Simone’s mother and sisters moved to San Lorenzo to live as cloistered nuns. One of Simone’s sisters, Emilia, was named Mother Superior and his sister, Elisabetta, became a nun. Their mother, Countess Matilde, lived there until her death. As is written on her tombstone in the San Lorenzo church, where she was buried in 1240.
The church’s Romanesque-style crypt is the most ancient area of the building and contains many of the characteristics of 10th and 11th-century architecture. It was used as a public burial ground for centuries. Indeed, the monastery is where Iacopone da Todi sought refuge after his excommunication by Pope Bonifacio VIII. Here he died on Christmas Eve 1306 and was later buried in the San Fortunato church in Todi.
By 1520 the monastery was the hideout for Thadea, the illegitimate daughter of Emperor Charles V and his mistress, Countess de la Penna of Perugia. Thadea grew up in San Lorenzo with the nuns as a young girl before she was kidnapped by her mother’s brothers and was obliged to marry Sinibaldo dei Coppeschi, a noble family of Montefalco. The convent was likely slowly abandoned after this.
When Napoleon invaded Italy, he confiscated and then sold ecclesiastical possessions to private individuals, which is how the Monastery ended up in my family’s possession: it was purchased by my ancestor, Antonio Gervasi, in 1805. First, it was transformed into a wheat mill, which would have been uncommon at that time given that it is on a 600-meter-high hill. At the beginning of the 20th century, it was transformed again, this time into an olive mill and was used as such until World War 2 to serve the family’s agricultural needs.
The energy to run the huge stone wheels, which are still visible in the garden today, came from wood in the surrounding forest which was burned in the fireplace in the downstairs lounge.

My family has been living in this area since centuries. I love the San Lorenzo Monastery and would like to share my love with you. Allow me to introduce you to the beauties of San Lorenzo and its area and offer a memorable vacation to you.
I can give you directions to buy local food, organize cooking lessons where you can learn how to make your own pasta and other local recipes. According to the season you can help yourself by picking the tomatoes from the orchard, cherries, apricots, plums, figs, and pomgranades depending on what is in season.
Basil, rosemary, and fennel pollen is available from our garden to accent your cooking. Wine tastings in Bevagna or Todi and visits to the main canteens:
Caprai and Tabarrini in Montefalco and Lunelli in Bevangna can be arranged.
The local winery La Segreta that produce wine proudly made in Collazzone is worthy of a visit. And the terracotta in Deruta and Gubbio provide a taste of the famous Umbrian pottery.
The house book is available on line for my guests. It contains the list and description of the main attractions, restaurants and things to do in the area. As well as the instructions on how to use all the house utilities. 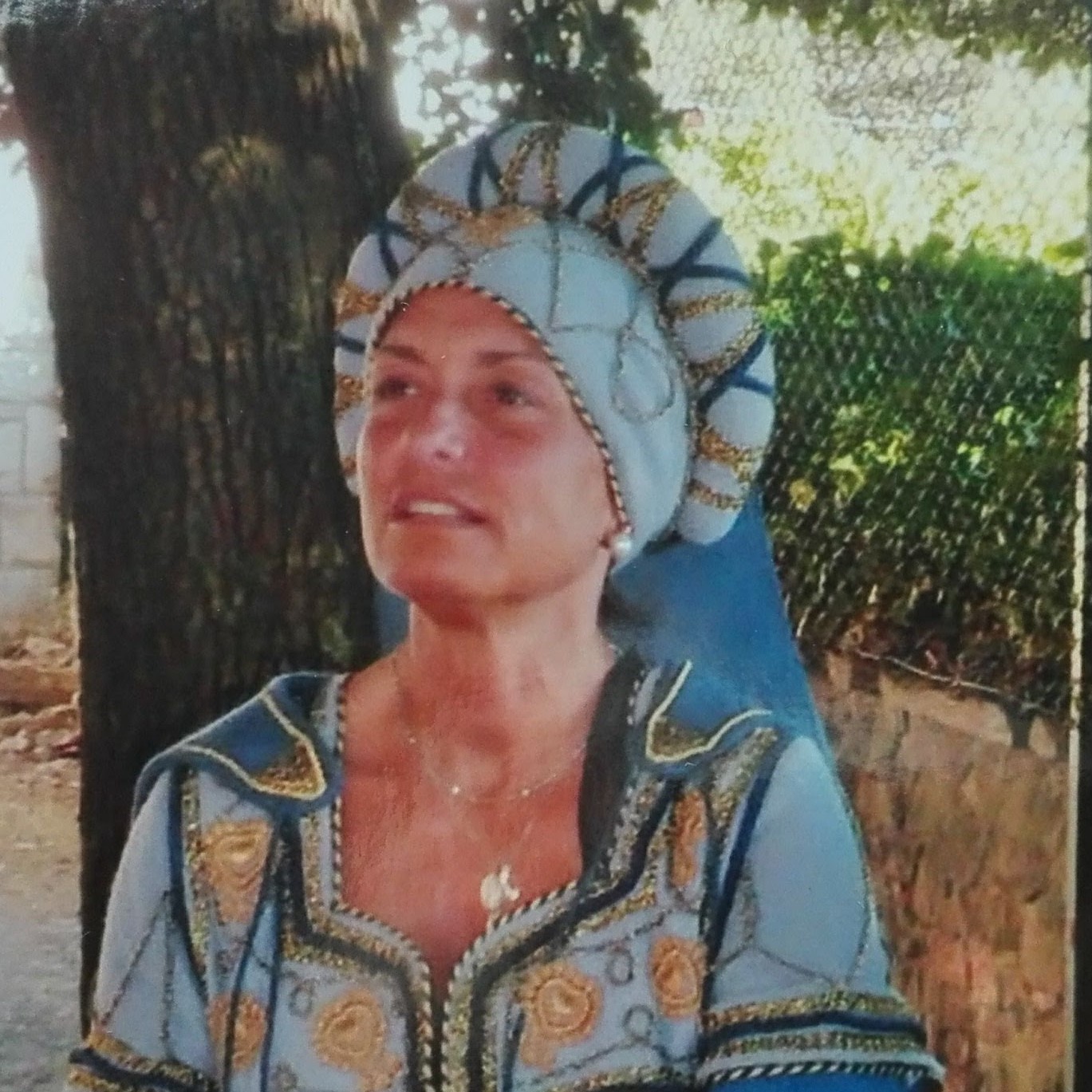 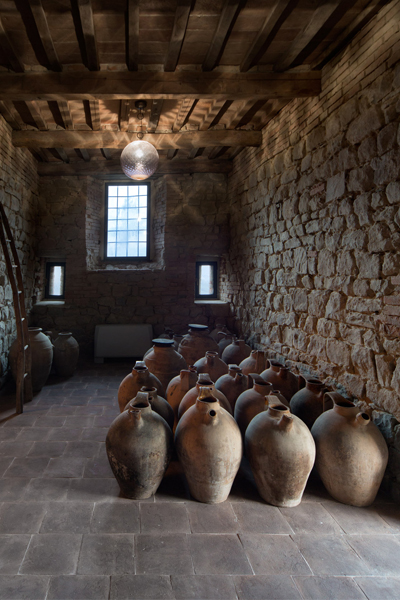 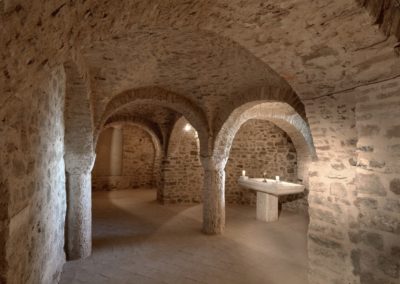 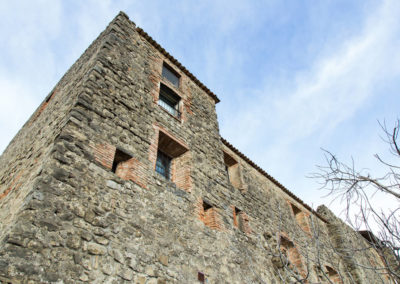 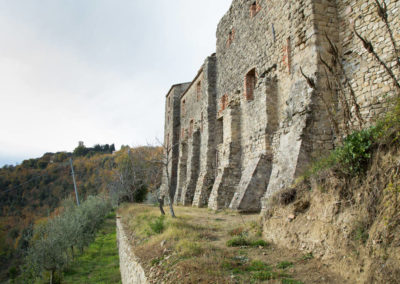 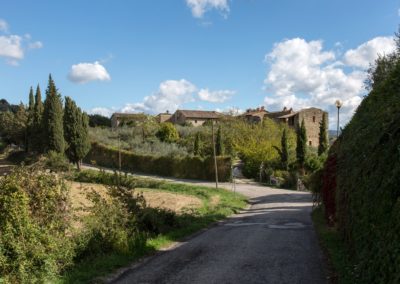 In the early 90s my father gave me this spiritual place and I started a life long restoration to return it to its original beauty.
The preservation of all details and original aspects have been the guideline of the restoration work. The hues and the materials are inspired by the Umbrian countryside.
Over a hundred olive trees still surround the main building and every year in the month of November the olives are picked and pressed to produce olive oil for the needs of our family and guests.
As a child I was fascinated by this magical  building and its stunning appearance. The groundskeeper and his family lived in the main house. What is currently the upstairs lounge and tower suite, used to be a huge storage room filled with jars for  olive oil which completely covered the oak floor.  The salon,  with its large stone fireplace once housed the mill and later used as a stable for livestock.
The large rooms of this part of the building suggest that might have been used to lodge pilgrims traveling to Rome in medieval times.
There are several recesses in the walls of the downstairs dining room which suggest that it was probably used as a refectory by the original Benedictine community. In medieval times, with no electricity, the monks would use little lantern so that they could see in the dark. The recesses in the walls were spaces where they could leave their personal lamps while eating, for example.

Any cookies that may not be particularly necessary for the website to function and is used specifically to collect user personal data via analytics, ads, other embedded contents are termed as non-necessary cookies. It is mandatory to procure user consent prior to running these cookies on your website.